Updates to Angelo J's profile since your last visit are highlighted in yellow. 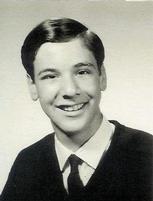 Graduated from Cubberley High School Class of1968, but all of my pals, friends were from Paly. I met Cory on the stage at the Jordan Special Purpose Room in my Junior year 1966/67. Our band, the Butterscotch Elephant Farm were setting up to perform (Bill and Ed McNamara, Bill & Fred Mitchell) and he just walked up and started playing Ed's Farfisa Organ and we shared a musical moment and an instant respect that has lasted 50+ years. I then met Joaquin "Pablo" as we were both recovering catholics. catholic school refugees from Bellarmine and me at St. Francis, we shared a common bond and love of music and events of the era. The Govan's, Mike Costello, Gary Rae, Hank Sousa, John Morris followed. Jack Nelligan and Bill Sweet were introduced through the band and together, we started the Bahrn Construction Company, which I was a charter member of. I remain in touch with the class of 69 and both Hank and Cheryl include me in all invites, tailgates, events and like Hank and Alan Curtiss I am a member at large of the class of 69.

Comment
Do you want to NEVER hear from a Paly Reunion again?

Happiest of Birthday returns sweet Betsy!! Have a great week!

Some 30+/- years ago, I adopted a one year old baby boy in Sao Paulo, Brazil. (Of all places, eh?) It was truly an adventure. After my girl friend at the time had flown down to Brazil to adopt the child as a single mother it turned out that Brazil would not allow a single woman to adopt, ever! Male dominated culture. She was heart broken bummed but, undeterred. Like a fool, I volunteered to help since I was romantically involved and supportive, and I thought she would cherish the gesture and commitment and be a good partner, so we got hitched on Hw. 80 in Tahoe, CA side (DUMB!) and in the spirit of, "No Good Deed Goes Unpunished" she bailed when we returned with the kid! Ahh, but hold on, my life has been full of "classic" surprises and this is only one of many! Needless to say, our union ended up a colossal bust (ugly, a nightmare!). I digress, once we were legally married, we flew to Sao Paulo together and drove to Hortolanida, Brazil a suburb of Sao Paulo, where we met with the judge and our "union" passed initial inspection. We had to stay there for a month and assimilate and win the hearts and approval of the locals. (run the gauntlet) I did my part, I played basketball with the guys, performed music for the locals and after a month of mixing it up with dignitaries, counselors, priests and "officials", we were approved to adopt Michael. My Italian Catholic background and heartfelt sincerity had convinced the "Judge" that we were a good family and he approved of our "Union" and our request to adopt Michael and it was sealed legally. We then flew to the American consulate in Rio, where a passport and SSN was granted and next thing we knew we were flying home from "Rio" with a 1 year old, Michael Rossi. (named after my father). LEGAL NOTE: His legal name cannot be altered as he is one of only a very few legally adopted Brazilian children according to the US State Department. Fast forward.. obviously, I was divorced from "Ms. Gilbert" and yes, it turned out that my affections were merely used to adopt the child and, it led to a very dark chapter in my journey. Somehow, I endured, landing on my feet when I met Judi. Fast forward... next time I see Michael, I'm called out of the blue by his mom, "Michael's in jail" (theft and resisting arrest)! I go down to San Jose, he is now 16 and attending Paly (Whoa). I had a vague idea he was at Paly, but only through the grapevine. I had a very interesting and "fatherly" conversation and suggested that he reach out to me when he got out. Turns out he was not allowed to contact me by his mom, total bitch. Meanwhile, out of sight and out of mind worked for Judi and me. I paid my child support on time, so my conscience was clean and I was having enough of a go with my own children, so, head down, keep moving, leave it be. Michael eventually did graduate from Paly High School. I was not invited or told by anyone, evidently, it was a closely guarded secret. I was never even contacted by the school system. I often wondered how she pulled that off. I was never updated and or informed of Michaels where about's, nothing. I had no idea as his, "mother" had mysteriously and illegally changed his name to Michael Gilbert. Fast forward.. I get a call from Michael out of the blue about two years or so back. He tells me that he is now fighting UFC and headed to Brazil for a match and to reacquire his family. He is now using his legal name. Hmmm... mom is now out of the picture! (Interesting development) Of course I encourage him to meet with his Brazilian mother, "family", I'm just happy to hear he is okay and doing well. He asks me if I know anybody in law enforcement in The City (SF), that somebody had stolen his vintage Harley and he's wondering if I could help him get it back? I made one phone call and the bike is miraculously found and returned in 24 hrs, (Musicians know people! It's a fact!) Fast forward.. On Instagram a couple months back I get a request to follow, "Wig Splitter".. hmm.. turns out that Michael Rossi is returned home to NorCal and is running a dojo in Milpitas, promoting cage fights and training kids in self defense. Gotta' like this kids spirit, right? Fast forward to NOW... (WoW) this kid is full of surprises.. in the true sense of irony and "happy endings", please welcome, "Jade Love Rossi", my newest grand daughter into the world... the journey is truly the reward! Onward and upward :-)